Online course registrations open at 10:00am.

Archaeology: How do the 21st Century Changes Apply to Work Done on MDI?

In 2016, we celebrated the 50th anniversary of the National Historic Preservation Act of 1966. That Act transformed the practice of archaeology. Change has been rapid and existential in the discipline since then. In this program, Rebecca Cole-Will will reflect on how archaeology has evolved and where the study of the past may lead us in the future. Her focus with be on MDI and Acadia National Park.

Rebecca Cole-Will was born and raised in Maine. She attended the University of Maine at Orono, where she pursued a degree in anthropology and specialized in the study of the pre-European contact archaeology of North America. She spent her summers working as an archaeologist in Acadia National Park. In 1980, she began graduate research at the University of Alberta, Edmonton, where she was the first woman archaeologist to conduct research on Banks Island, the westernmost of the Canadian high arctic islands. There, she studied culture contact effects between Inuit cultures and British naval explorers.

Rebecca worked at the Abbe Museum before assuming the position of Cultural Resources Specialist at Acadia National Park in 2006. She now leads a team of resource managers who are the park’s specialists for stewarding Acadia’s cultural and natural resources. 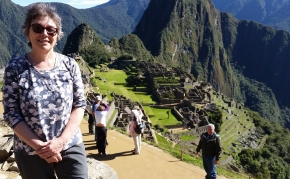