Metals for Our Renewable Future: Should We Mine the Deep Sea?

Climate change, the overarching challenge of our times, is already affecting every aspect of life on earth and will do so with accelerating intensity for decades to come. Its main cause is CO2 and other heat-trapping gases released from burning coal, oil and gas to generate electricity, heat buildings and power cars, trucks, ships and aircraft.

Just as a blanket keeps us snug in bed by keeping our body heat from radiating to the rest of the house, these gases form a blanket that keeps earth from radiating heat into space. As the atmosphere and ocean warm, we experience more frequent and intense heat events, erratic weather patterns, more intense storms, flooding and drought, sea level rise, crop failures, food shortages, climate refugees and many other ecological, social and economic dislocations.

The International Panel on Climate Change (IPCC) has stated that if we cannot bring emissions under control within 10 years, we will have no chance of limiting global warming to 1.5°-2°C (2.7°-3.6°F).

Reducing greenhouse gas emissions requires a complete overhaul of human power generation, industry, agriculture and economics, as well as significant changes in human behavior.  Failure to achieve those changes will lead to widespread misery, and indeed already has.

Transportation is the leading cause of greenhouse gas emissions in the US.  Electrifying the automotive fleet is a major goal of creating a renewable economy. Electric vehicle batteries require large amounts of copper, manganese, cobalt and nickel. Nodules on the deep-sea floor of the Pacific Ocean contain more of those metals than all known terrestrial supplies. A number of companies, including DeepGreen Metals, Inc. hopes to meet metal needs by collecting those nodules. This talk will compare the social and environmental costs and benefits of obtaining the metals from land mines vs. deep-sea nodules, a decision that will have profound implications for people and natural habitats.

Steve Katona received his BA and PhD from Harvard University, including a Fulbright Scholarship year at the Department of Oceanography, University of Southhampton, UK. He was a founding faculty member at California Institute of the Arts (1972), where he taught ecology in the School of Design, and also at College of the Atlantic, where from 1972-1993 he taught courses in ecology, marine biology, invertebrate zoology, marine mammals and biology of mammals and co-founded Allied Whale, COA’s marine mammal research group. From 1993-2006 he served as COA president and was recently named President Emeritus.

Following COA he was sustainability consultant to the New England Aquarium for three years, then spent 7 years as a research scientist at Conservation International, Arlington, Virginia, where he co-founded the Ocean Health Index—the first comprehensive project to measure the sustainability of the ocean-human system at global and local scales—and served as its Managing Director.

Katona has served on the Acadia National Park Advisory Commission and now serves on the Advisory Board of the Marine Conservation Action Fund. He is a collaborator on the Ropeless Fishing Consortium, which focuses on finding ways to catch lobsters in ways that do not endanger right whales and is on the Board of A Climate to Thrive on Mount Desert Island.

For the past 18 months he has worked as a consultant to DeepGreen Metals, Inc., evaluating the social and environmental costs and benefits of deep sea mining for metals critical to the global transition to a renewable, emissions-free energy economy.

He lives in Salisbury Cove with his wife, artist Susan Lerner.

The hot buffet at Birch Bay Village in Hulls Cove, begins at 11:30 and costs $12; the lecture is from noon to 1:00.  Reservations are required for either and must be received by noon Wednesday, September 11th.  Contact Acadia Senior College at 288-9500 or email learn@acadiaseniorcollege.org.  This event is open to the public. 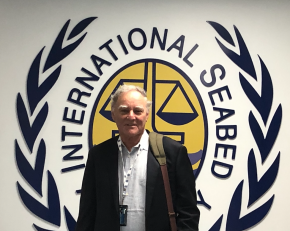