Dr. Timothy O’Connor will portray Ben Franklin, who was appointed Postmaster General by the Continental Congress in 1775, to show us how Colonial era letters and stamps - some from Maine - illuminate the qualities of everyday life as well as momentous incidents in American history. Before we had texting, Facebook, Twitter, email, the telephone, or even the telegraph, we had the Post. In fact, this critical means of communication was so important that the Continental Congress established the Post Office as one of its first official acts. When you hear the term "philately" (stamp collecting), you might not think of how these 18th century stamped letters can be used to tell the story of America!

Note: This talk was originally scheduled for last November, but was postponed due to a snow storm! We'll finally get to hear from Ben Franklin - fingers crossed for good weather!

The hot buffet at Birch Bay Village in Hulls Cove, begins at 11:30 and costs $12; the lecture is from noon to 1:00.  Reservations are required for either and MUST BE RECEIVED by noon Wednesday, November 13th.  If you need to cancel a reservation, please try to let us know by noon on Wednesday as ASC must pay for reservations regardless of how many people actually attend.

Contact Acadia Senior College at 288-9500 or email learn@acadiaseniorcollege.org.  This event is open to the public.

Dr. Timothy O’Connor is a summer resident of Seal Cove, and recently won the Grand Award at the Seattle Philatelic Exhibition. He is a graduate of Dartmouth College and Tufts Medical School, and is a retired Oncologist. Tim divides his time between Seal Cove and Boston, has been married for 46 years, and has grandchildren in Ellsworth. He enjoys golf, philately and Colonial American history. 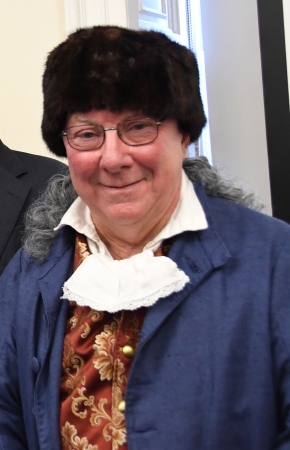