Please note that this event is FULL. Email or call if you want to join the waiting list.

Have you ever wondered about the geologic origin of Mount Desert Island?  How it was put together?  What effect the glaciers had on the current landscape? The Brauns will take us on a geologic history tour. Their talk will begin around a billion years ago when MDI was attached to the super continent, Gondwana. It split from Gondwana and eventually attached itself to North America. MDI itself experienced three major geologic events, which resulted in the formation of ten different rock units; that now make up MDI. The oldest of these formations is the beautifully crenulated Ellsworth schist.  Most of the rock on MDI formed around 420 million years ago as alternating intrusions of pink granite and gray gabbro magma fed a huge volcanic caldera the size of MDI.  Two miles of rock have been eroded since then to form the present landscape.  Over the last 2.5 million years glaciers have repeatedly covered the Island with up to 5,000 feet of ice.  When the glaciers retreated they left behind a number of different deposits and landforms helping to create a beautiful and striking landscape.

At the end of the talk copies of their book, Guidebook to the Geology of Mount Desert Island and Acadia National Park, will be available for sale.  Proceeds from the book sales will benefit the Maine Granite Industry Museum at 62 Beech Hill Cross Road.

Ruth Braun earned her Masters of Science from Johns Hopkins University. Over the years she has taught science, math and geology courses in a variety of high schools and universities. 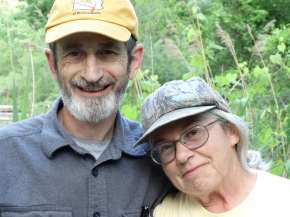