The Evolution of a Maine Filmmaker

This free event is open to the public - please register below.

Kane and Lewis will talk about the process of documentary filmmaking and will share some short clips from a few films to give people a sense of their work, including a clip from the film Protecting the Nature of Maine, the 50th anniversary film for the Natural Resources Council of Maine, with shots from Acadia National Park.

This free event is open to the public.

Richard Kane is a New England Emmy-nominated film director now producing the film Truth Tellers, a portrait of the artist Robert Shetterly and his project Americans Who Tell the Truth. Kane's film I Know a Man … Ashley Bryan was screened at 15 international film festivals and won the Hector Leonardi Award at the Hamptons DOCFEST.  His previous documentary Imber’s Left Hand won four Best Film Audience Awards. David Driskell: In Search of the Creative Truth won the Shaw Prize for Best Film (Maine Public) and is included in Sam Pollard’s newest film Black Art: In the Absence of Light showing on HBO in February 2021. His film M.C. Richards: The Fire Within is a classic in the art and creativity genre. Kane won a Cine Golden Eagle for Faces of Microcredit and produced Technology: Renewing the American Dream, narrated by President Clinton.

Melody Lewis-Kane is a potter, arts educator and filmmaker and is the primary consultant on all arts and education films produced by Kane-Lewis Productions.  She produced the documentary M.C. Richards: The Fire Within, selected for 12 film festivals winning Best Film at the Image Gazer Film Festival. Melody produced and co-wrote Arts & History: Storytelling funded by the Corporation for Public Broadcasting and the Kennedy Center Education Department.  She is the author of four curriculum guides including one that accompanies Stephen Pace: Maine Master, a film nominated for a New England Emmy Award. She supervised the development of a Resource Guide for Teachers and Librarians for I Know a Man … Ashley Bryan, in collaboration with the Harvard Graduate School of Education.

To register for this event, please fill out the form below, or email learn@acadiaseniorcollege.org.

You will receive the Zoom link a day or two before the presentation. 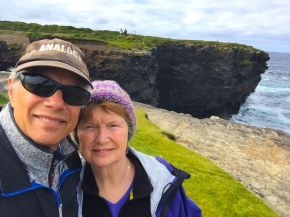