Join Nick Clark, Founding Director of the Ashley Bryan Center, as he discusses the floor-to-ceiling frescoes at the South Solon Meeting House in rural central Maine. The frescoes were painted from 1952 to 1956, by a dozen contemporary artists including Ashley Bryan, who painted a curved panel depicting the Parable of the Sower (Mark 4:1-3), a moment when Jesus is teaching and so many people come to hear him that he needs to get onto a boat to better address the crowd.

The Solon Meeting House was built in 1842 and is on the National Historic Register. The meeting House began as a church and community meeting place. Its podium, pews, choir loft, windows, and steeple are original, and after some years of deterioration, a restoration effort began in the 1930s.

Read the review in the Portland Press Herald

Everyone who registers for this program will receive information on Ashley Bryan's fresco "Parable of the Sower" and directions to the meeting house so you can plan a field trip to see the paintings and the meeting house on your own. The building is always open to the public except if a private event is being held.

Nick Clark is the founding Director of The Ashley Bryan Center where he helped place Ashley’s archive with The Kislak Center at The University of Pennsylvania and helped ensure Ashley’s legacy would remain vibrant in the state of Maine through major donations of art to the major museums in the state. Additionally, the Center is working to establish the Storyteller Pavilion on Islesford as another sustainable aspect of Ashley’s legacy. Clark is the Founding Director and Chief Curator Emeritus of The Eric Carle Museum of Picture Book Art, where he worked from 2001 until his retirement in 2014. Previously, he served as the Eleanor McDonald Storza Chair of Education at the High Museum of Art in Atlanta. After holding posts at the National Gallery of Art in Washington, DC, and Instructor in Art and Director of the Lamont Gallery at Phillips Exeter Academy from 1982 to 1989, he served as Curator of American Art at the Chrysler Museum of Art in Norfolk, Virginia from 1989 to 1997.

This event is free and open to everyone.

Click to register for this event or email learn@acadiaseniorcollege.org

You will receive the Zoom link a day or two before the presentation. 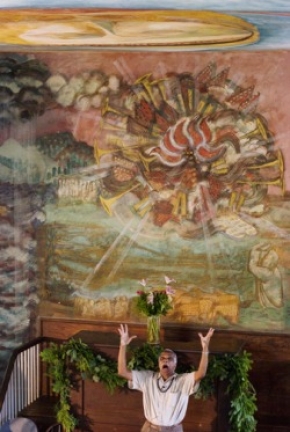